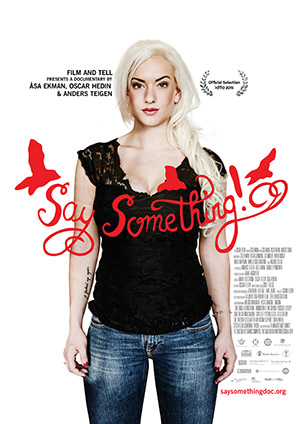 Directed by Åsa Ekman (My life my lesson), Say Something is the second film in the documentary diptych SEETHEKIDS, aiming to raise the issue of children living in violence. The films have reached over 5 million viewers and have pointed out the need for support and treatment to eventually achieve a legislative change in Sweden (to criminalize the act of domestic violence in the presence of children).
In co-operation with Ersta diakoni, SKR, The Gålö Foundation, Culture Foundation of the Swedish Postcode Lottery, The Erica Foundation, Save the Children Sweden, Swedish Psychological Association, The Swedish Church: Sofia Congregation and Victim Support Sweden.
Festivals & Forums The film was presented at the IDFA Forum 2014, the same year as My life my lesson premiered in mid-length competition at the same festival. Say Something had its world premiere in Panorama at IDFA 2015.

Won Kristallen 2017 (the official Swedish television Award) for Best documentary
of the year.

Isabell grew up witnessing her mother’s boyfriend beating her mother. Say Something is a coming of age documentary where the young person’s teenage years has been characterized by witnessing violence. We follow the relationship between mother and daughter as they struggle not only to communicate but also to understand and forgive. Will her mother listen, and will they be able to reconcile? Say Something joins My life my lesson as the completing part in a documentary diptych on children growing up in domestic violence. Åsa Ekman, Oscar Hedin and Anders Teigen
brings us a powerful, intimate and unflinching story about a girl who is trying to make peace with the past and at the same time chase her dreams.